Home Trades How To Protect Yourself Against the Next Market Crash

The New Year is rapidly approaching, but instead of a Santa Claus Rally we’re mostly just seeing further declines in stock prices. The S&P 500 is already down about 6% in December alone – and has dropped nearly 3% for the year. That’s hardly the year most were expecting 2018 to be.

Unfortunately for stock buyers, there isn’t an obvious all-clear signal on the horizon. We could have several more weeks or even months of high volatility ahead. In fact, the current situation resembles a bear market, despite the economy still being fairly robust at the moment.


Undoubtedly, there are concerns over global economic growth slowing down. And of course, the financial markets tend to be forward looking. Still, there doesn’t appear to be a recession right around the corner. In fact, recent U.S. consumer spending data was better than expected.

So why then do stocks continue to sell off?

First off, investors are concerned over the trade war with China and the impact that tariffs may have on corporate earnings. We’ve already seen how negative trade wars news has taken a toll on major companies like Apple (NASDAQ: AAPL), which has dropped 14% over the past month.

But even more concerning may be interest rates. The Fed may be forced to raise rates to stave off inflation (because the U.S. is at full employment). However, both the government and many individuals are saddled with a boatload of debt.

That means raising rates will increase interest payments across the board. That doesn’t even include the impact of higher rates on the housing market and business loans. It’s no wonder the investment community has been laser focused on anything the Fed says and does.

So is the solution to simply go to cash until the storm clears? Generally speaking, I’m not a fan of going to cash when it’s fairly easy to hedge your portfolio risk with options. Moreover, options allow you to find tune your hedging to best match your portfolio. Or, you can simply hedge the market itself.

One trade strategy I like in this environment is buying a put spread in iShares Russell 2000 ETF (NYSE: IWM). IWM is the most popular ETF for trading US small cap stocks. I like using it to hedge because it isn’t as expensive (in absolute terms) as a the more broad-market focused SPDR S&P 500 ETF (NYSE: SPY). And, small caps tend get hit first and hit harder than blue chip and other large cap stocks.

Some traders prefer to buy naked puts for hedging purposes as they don’t want their gains to be capped in an all-out meltdown. However, I prefer put spreads as I want to keep my hedges as economical as possible even during scarier periods like we’re in currently. 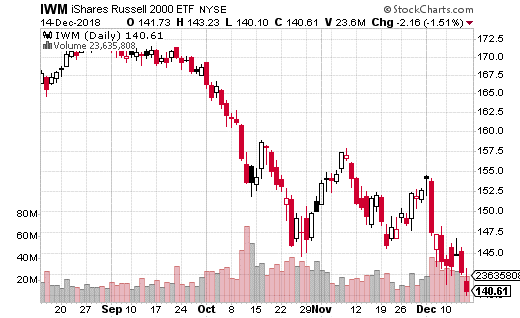 In other words, your hedge doesn’t start working until the index drops 4.5% or lower. However, if there’s a sustained selloff (say 10% down) you’ll make 300% on your hedge. For about 2 months of protection and $125 per spread, I think it’s a very reasonable way to hedge downside risk in a stock portfolio.