Home Trades How to Make A 186% Return on Video Games

Typically, when growth in the video game industry is discussed, it’s all about mobile gaming growth. After all, playing games on smartphones and tablets has been where most of the action has been in recent years, at least in terms of investing.

While casual gamers may still be driving plenty of business in mobile gaming, there’s still ample opportunity in more traditional gaming platforms, such as consoles and PCs. In fact, these traditional platforms may be even more important looking forward as AR/VR (augmented reality/virtual reality) games become more popular (and accessible).

One of the biggest players in the video game industry is Electronic Arts (NASDAQ: EA). EA is mostly known for its big label games, particular sports games and first-person shooters.  Just last week, EA posted earnings and had a pretty substantial share price decline after issuing lower than expected guidance. 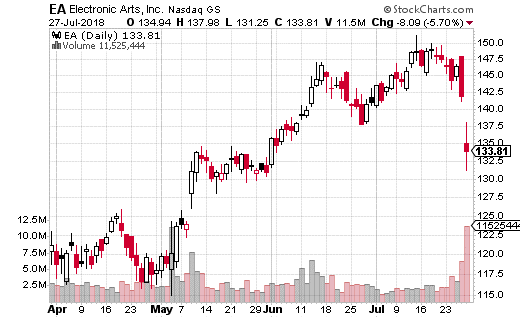 As you can see from the chart, EA stock dropped something like 6% the day after its earnings miss. However, the stock was having a great year up to that point and probably had become overvalued. The drop in share price may have been exactly the entry point some investors were waiting for.

First off, EA has several big games yet to come out this year which could boost revenue and earnings more than expected. I already mentioned the long-term potential of video games as AR/VR tech becomes better and cheaper. And then there’s the whole e-sports industry. Playing games competitively is an industry that’s growing like crazy and there’s a ton of money to be made in that arena, so to speak.

A size option trader apparently agrees with me and purchased a massive call spread expiring in January of 2019. With EA stock at $132, the trader bought roughly 11,000 January 135 calls while selling the 155 calls for a total debit of $7. That means the trader spent over $8 million on the trade. Clearly, he or she if very bullish on EA over the next half year.

With $7 paid in premium, the breakeven point for the spread is at $142. That same premium is the max loss for the trade. Max gain is at a point anywhere above $155 at expiration, slightly higher than where the stock was before the earnings miss. Max gain is $13, or $14.3 million in dollar terms… that’s also a return of 186%.

I think this a decent trade to emulate. EA may not recover for a few months, but has several potential catalysts which could send the stock higher down the road. The price of the spread is not cheap, but 186% return potential and six months of time is reasonable for the cost.

If you like the trade but want to reduce your costs somewhat, you can narrow the spread. For instance, the January 135-145 call spread only costs $4 but lowers your max gain to $6. You can also pick an expiration which is closer, but I think EA may need the extra time to recover.