Home Trades Want Your Trades to Skyrocket? Use This Method…

What if there was a simple trick to juicing profits during earnings season, regardless of the direction of the stock.

For trades, the number single biggest problem during earnings season is not knowing where a stock will move after its earnings come out.

And that not know can make it simple to miss out on profits, or get wiped out entirely.

But, according to Tom Gentile, there is a way to exploit any company every earnings season – good or bad.

And it all boils down to this one little secret…

For example, you’ll often see a stock ramp higher in price before the company releases earnings, which could drive the markets higher.

And if you don’t know the pattern, you’re virtually entering the trade blindly.

Tom reveals his proprietary system that helps traders position an options trade prior to the report and capitalize on this price move higher.

What you’re looking at below is the average percentage move in Travelers Cos. Inc. (NYSE: TRV) prior to earnings, which is in the 1.25% range.

In this example we can see what happens if a stock gaps higher, makes a new high, or takes out a previous overhead resistance area after its earnings report.

Now, there are times that options traders may try to get into a trade (let’s say a long call) in advance of the earnings or even the day before the announcement only to find that they can’t enter into the trade.

This is a technical pattern where the price point gets established as the resistance level (meaning a stock can’t trade beyond that point) before demand for that stock eventually drives the price even higher.

Sometimes a technical breakout can fail, which is actually even better. In this case, the stock trades above resistance intraday and then closes under that price. This is likely to become a failed breakout (we’ll talk more about that later). When a stock does break out and closes above resistance, that gives you more conviction that the price move will be sustained and that higher prices can be expected.

The stock doesn’t always keep moving straight up though…

So here’s the secret…

These are the three things you want to look for:

Look at the chart below on TRV (the green “E” triangle represents the earnings announcement): 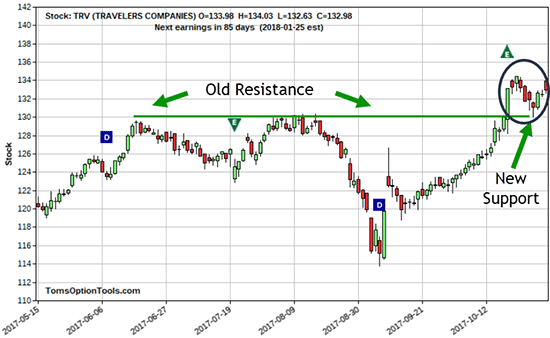 The stock ran up before earnings came out, as it has shown a consistent history of doing. That took it past its existing resistance level at $130. It then held above that resistance point for a handful of trading days, even after earnings.

But then look what happened…

It didn’t go into a full-scale tailspin and drop a huge amount. As you can see, it performed the classic “old resistance becoming new support” technical pattern and tested the $130 support level for one day before shooting back up in price. This pattern can also work in reverse, where old support becomes new resistance.

So keep your eye out for stocks that break out above their previous resistance points or pivot point highs where a stock may break out coming off earnings.

You’ll want to keep this on your radar so you can track the stock’s previous high – maybe set an alert if your brokerage platform allows for that capability. And when it comes back to that price, be poised to initiate a bullish options trade (or bearish in the reverse pattern).