On March 23, Nike Inc. (NKE) released its third quarter earnings fiscal 2016 earnings to a lukewarm reception. The world’s largest athletic apparel manufacturer reported that it generate diluted earnings per share (EPS) of $0.55 for the quarter and revenues of $8 billion, up 8% year over year (14% on constant currency). Yet the stock price, which was trading near all-time highs, saw a bit of pull back as the bears pounced on flat gross margins of 45.9% year over year and the high multiple that had been priced in.

That being said, a bullish case for Nike to take out its all-time highs could be built on a few key factors. First was Nike’s 17% YoY increase in total future orders (constant currency terms) ahead of Rio 2016 and the European Football Championships. Future orders in China were especially noticeable as growth in the world’s second largest economy grew 36% YoY on constant currency, compared to 34% in the prior fiscal year. Secondly, and expanding on the last point, Nike’s overall ventures in China have been marked with tremendous success.

One of the reasons behind Nike’s ability to generate revenues in the stubbornly elusive country is China’s fast growing health and fitness industry. Forbes reports that the health and fitness industry generated around $5 billion in 2015, after an average yearly growth of 14% since 2010. At the same time, gym attendance has also grown in 70 major Chinese cities by 4-5 million users since 2011. Nike is also targeting the rising popularity of basketball in China, which according to the China Basketball Association, is played by roughly 300 million people (or the size of the entire US population) across the country. One of the ways that Nike targets this growing market is through ads such as this, as well as this one, which feature NBA legend Kobe Bryant.

Exhibit 1 below shows a steady increase in Nike’s revenues in China since 1Q2015, compared across all geographic divisions, while Ex.2 shows a similar upwards trend in Chinese product mix, with a heavy emphasis on Nike footwear ($719 million, 3Q2016) and apparel ($235 million). 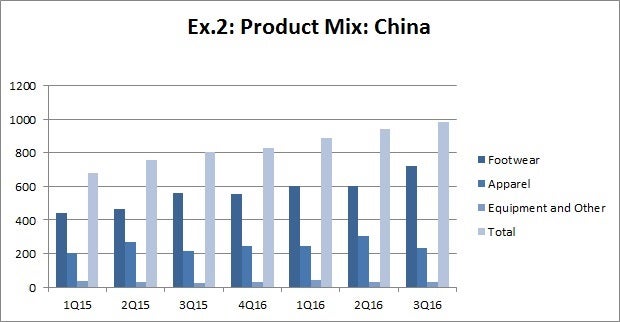 Nike’s strong third quarter earnings highlighted the athletic manufacturer’s growth in future orders and impressive performance in the Greater China geographic segment. Despite a down turn in the world’s second largest economy, Nike has managed to steadily gain market share in China, especially through its footwear and apparel products. One of the reasons behind Nike’s success is the firm’s ability to capture the growing fitness industry and China’s love of basketball.

About the Author: Investopedia