Who is the better options trader?

A. Two Nobel Prize winning economists who founded the very model that options pricing is based on.

B. A guy who thinks the market is like a giant poker game.

Of course, A right? They are the geniuses. I mean they wrote the Black-Scholes options pricing model.

But, if you have ever read the book “When Genius Failed” you would quickly realize that the smartest people in the room are not the best investors/traders. In short, the two Nobel Prize winning economists, Myron Scholes and Robert Merton lost $4.7 billion dollars in four months. That’s billion with a B.

And while they were losing money, the trader who views the market as one big poker game was making billions – also with a B.

His name Jeff Yass and he runs the most successful options trading firm in the world, Susquehanna Investment Group.

Every professional options and poker professional will tell you the same thing – the longer you play with a negative edge, the greater the probability of eventual financial ruin. Probably the most basic requirement for successful trading is that you must have some well-defined method, or, in other words, a specific approach that gives you an edge.

Without such a method, or edge, you will eventually lose, because the odds are 50/50 before transaction costs. If you don’t know what your method is, you don’t have one.

Which is why I trade credit spreads.

It gives me a defined edge.

It allows me to choose my own probability of success.

I will explain in The Trade Arena below.

However, through the use of credit spreads I can choose a much greater probability of success.

Just look at the options chain of AAPL below.

The further away a strike is from the current price of the underlying stock the greater the probability that the strike will close out-of-the-money.

Basically, I am selling options to speculators – traders, most likely newbies, who are speculating that Apple will continue to surge past the 530 strike by March options expiration (35 days). The trade they have chosen to make has a probability of success of 19.17%. Those are odds that I would never take as a trader.

Apple would have to move 7.5% higher for the trade to be in jeopardy of taking a loss. So, I could be completely wrong in my assumption of Apple moving lower and yet I can still make a profit.

Why aren’t more and more investors using this strategy? It makes perfect mathematical sense. The odds are overwhelmingly in your favor.

This is what I do in the Options Advantage service and it is what I have been doing throughout my entire career as an options trader.

Yet, I am still amazed how many still insist on listening to talking heads or anyone for that matter on what stock to buy. Knowing that each and every choice only has 50/50 odds of success, it just doesn’t make sense why people keep perpetuating the guessing game that goes on daily in the investment world. Stop guessing and start using probabilities to make your decisions. 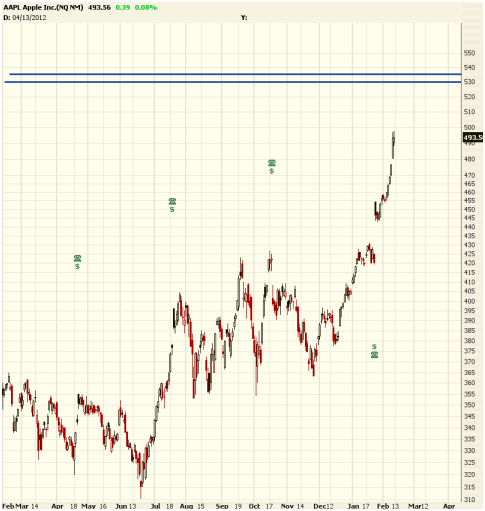 Consider paper trading the idea above. I know you’ll learn something.

Trading options is an investment strategy that has worked for Andy for more than 15 years. Now Andy is making options work for subscribers to hisWyatt Investment Research newsletter, Options Advantage. Since its inception in late September, Andy has earned an average 16% yield for hisOptions Advantage subscribers with an 88% win rate. Mind you, that was during a time when the market vacillated between the extreme high of the best October for the S&P 500 in 20 years and the extreme low following the worst Thanksgiving week for stocks since 1932.