Home Trades It Is Time To Get Bullish On Stocks?

October was a volatile month for stocks and many investors are probably hoping November approaches something closer to normal conditions. While market volatility may be helpful to active traders, it generally is not what long-term investors like to see.

Keep in mind, most people (and funds) own stocks and count on the market going up over time to help fund their retirement. Heavy volatility in stocks can muddy the long-run picture for investors and cause an undue amount of stress.

So, a calmer November will certainly help ease the nerves of many stock owners. But, first we have to make it through mid-term elections and the next FOMC meeting. The fact that elections come one day before the next FOMC decision could mean another spike in volatility (at least until the results are known).

However, despite the potential for higher uncertainty to rear its head early in the month, there is a good chance volatility will calm down for the remainder of the year. Once elections and the FOMC meeting are done, we have the Thanksgiving holiday break and then the December holiday season. These tend to be calmer periods.

Stocks often trend higher towards the end of the year. It may be even more pronounced this year due to the all the selling we saw in October. Of course, this year has been more volatile than most so we don’t know for sure what the future will bring.

As always, it’s not a bad idea to look at the options market for some clues as to what the smart money expects to happen in the coming weeks. Once again, a very large trade caught my eye in the SPDR S&P 500 ETF (NYSE: SPY).

SPY tracks the S&P 500 and is the most heavily traded ETF in the world. It is probably the most popular and easiest way to trade “the market” as a whole. While SPY is definitely a large cap index, it is does tend to correlate very closely with any overarching measure of US stocks.

Back to the trade…

A well-capitalized trader purchased just under 20,000 SPY December 31st 280 calls for $4, with the ETF price at $272.69. The trade cost $8 million in premium, which is the max loss on the strategy should SPY remain below $280 at year’s end. Breakeven for the trade is at $284, and each dollar above that generates an addition $2 million in profits per dollar higher.

$8 million is a lot to risk on a long options trade, so the strategist clearly believes the stock market is going to rally as we head into the new year. Moreover, this trade was labeled as an “Intermarket Sweep” which means the trader snatched up every available option at $4 across all exchanges. This type of action usually implies strong conviction on the trade.

While there may be some volatility heading into the elections and FOMC meeting, at least this one massive trade is expecting a significant upturn in stocks by the end of the year. 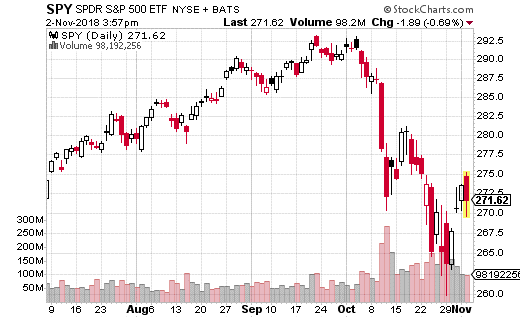 If you want to also get long the stock market through SPY, you can do a similar trade. But, instead of buying naked calls, you could execute a call spread and save yourself some upfront premium. For example, the SPY December 31st 280-285 call spread costs about $1.65 with the SPY at $271.30. That lowers your cost and risk, but still allows you to achieve a max return of 203% if SPY is at $285 or above at year-end expiration.