Many investors look for specific catalysts when it comes to the stocks they buy, and that’s a practice I encourage – especially when there’s a regime change at the very top.

Because a change of leadership can be extraordinarily profitable.

Today we’re going to talk about what’s happening at The Goldman Sachs Group Inc. (NYSE: GS), along with a trade that could set you up for some pretty juicy profits by Thanksgiving…

He’s the firm’s new CEO, and he takes “the chair” from current CEO Lloyd Blankfein on Sept. 30, only nine days from now. A political science major out of Hamilton College, Solomon’s taken a circuitous route to the top that’s included stints at Drexel Burnham Lambert, where he sold junk bonds and commercial paper, and time at Bear Stearns, where he rose to prominence running the investment banking division.

Goldman promoted Solomon to president last year in a move that put him side-by-side with Harvey Schwartz, who subsequently resigned last March. And, in doing so, he all but made Solomon the heir-apparent.

Solomon is as unconventional as he is bold, and I think that’s a real advantage at a time when the firm needs dramatic change.

Not many people know this, but Solomon moonlights as “D-Sol” on the electronic dance scene, and claims more than 425,000 monthly listeners on Spotify. His single, “Don’t Stop,” was released this past June, and it’s a very catchy remake of the 1977 Fleetwood Mac original, if I do say so myself.

Anyway, back to the trade setup.

I think Solomon will quickly remake Goldman Sachs in his own image.

These and other moves tell me that Solomon’s got three things on his mind: a) further expanding into consumer banking, b) pushing deeper into commercial banking, and c) expanding Goldman’s client “footprint.”

Start the Countdown: In just FIVE days, you could have a fat check for $23,441 in your mailbox. And the best part is, it’s just one short phone call away. Over 80% of eligible seniors may be entitled to this cash. Are you one of them?

All four men have deep roots and experience in investment banking, so this is a marked departure from the trading-centric cabal that’s run the firm for decades. It’s also a change in direction because investment banking is a relationship-driven business, characterized by personal knowledge and experience as opposed simply to revenue, which is typically the case for firms driven by trading.

I think this will result in entirely new levels of profitability that blow by the $5 billion revenue growth plan implemented in 2017. And not a moment too soon.

Goldman has lagged behind peers like JPMorgan Chase & Co. (NYSE: JPM), Bank of America Corp. (NYSE: BAC), and Morgan Stanley (NYSE: MS) in recent trading. Which means this is a classic turnaround play that’s almost completely unrecognized by the Street, as I type.

A quick look at the charts makes that very evident… 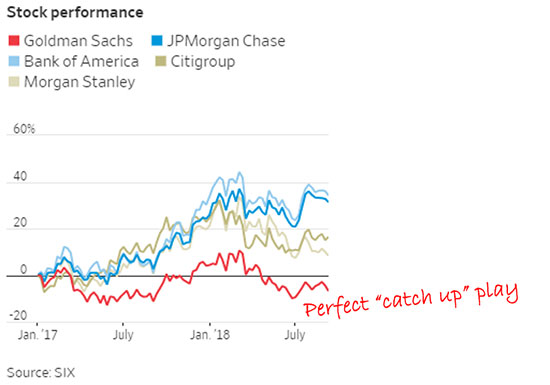 Now for the fun part: profits.

That’s good for a relatively quick and very respectable 31.58%.

But I want great, and I have no doubt you do, too.

That is, after all, why we’re here!

As an aside, you could also vary this by using 10- or even 15-point spreads between strikes, if that matches your personal return objectives and risk tolerance. The numbers are roughly similar, and you’ll still be shooting for a double.

Vertical call spreads are a terrific way to play stocks poised for a quick move. They’re also a great way to balance risk and reward with a realistic forecast.

See Why Bitcoin Is Far from Dead: Cryptocurrency legend Michael Robinson just revealed why Bitcoin could be poised for a record-breaking rebound. Before the mainstream public gets any wiser, you need to see this now.

Vertical call spreads, in case you’re not familiar with ’em, always involve two call options with the same expiration date but different strikes. You pay for the options together, so your risk is limited to your initial purchase price – a “debit” in accounting speak.

The trade-off – at least according to some folks – is that your upside profit potential is “limited” to the difference in premiums between the two options. I don’t think that’s a big deal when you’re shooting for an appealing 100%, though.

“GTC” means that you’re entering the order “good till canceled.” That’ll buy you some time for market conditions to come to you if needed, while also freeing you up from the need to sit by your trading screens all day. Just don’t forget to check back in a day or two and “kill” the order if it doesn’t fill for any reason; the last thing you want is a trade to trigger that you’ve forgotten about!

My profit target on this trade is $5, excluding fees and commissions, which vary from broker to broker.

At that point, you will have made 100% on your money if the trade goes as planned, based on the numbers I see as I write. Obviously, a reversal in overall market tenor would change things, but that’s a function of risk management, not pre-trade planning.

Risk management is pretty simple when it comes to a trade like this one. I suggest using a 50% “give back” in the event things don’t go as expected – meaning if you buy the spread at $2.50, then you’d exit the trade and consider it busted at or below $1.25 for a loss of 50%.

As always, this is a speculative trade, so do NOT invest money you can’t afford to lose. Better yet, control risk before you enter the trade using position sizing – something we’ve discussed before as a means of maximizing profits.

I will be with you every step of the way, as always.

Up Next: Your Path to $2 Million by Next September

Canada is days away from implementing its historic new marijuana legislation.

And when it does, it will deliver the chance to pocket as much as $2 million by this time next year.

Don’t miss your shot to get in on the ground floor of what could be the biggest market shift in our lifetimes. In this urgent briefing, you’ll discover exactly how to position yourself to cash in… including the top three stocks to buy right away.