Memorial Day weekend is quickly approaching but the buzz surrounding the holiday is different than usual.

In the past, most people packed their bags for a long weekend getaway but now, many are wondering if that short trip is even worth the gas money…

As of Monday, the national average for a gallon of gas was sitting at $2.92 – and that’s expected to go up at the start of the weekend.

You see, there’s an easy way for you to “reimburse” yourself at the pump.Three, actually…

Back in February, I predicted that oil would take off on a bullish run based on a strong seasonal pattern the Money Calendar was showing.  And that pattern revealed that when the oil market was crashing, it a typically moves higher between mid-February and mid-July. 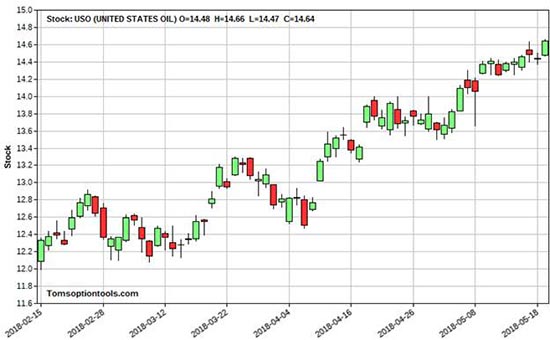 Fast forward to now and oil prices are surging, with no signs of slowing down – just like Money Calendar predicted.

Now, you’ve probably seen things like oil moving as high as $100 per barrel – and the truth is, I don’t think it will stop there. Both Organization of the Petroleum Exporting Countries (OPEC) and non-OPEC countries have been flirting with production cut extensions into mid-2019. Back in April the cuts marked a record number of months in which they adhered to the cuts, which was 5-months in a row. That means oil prices could go even higher.

And with the weekend right around the corner, it a guarantee that oil will see a short-term bump in price.

But that doesn’t mean you can’t “reimburse” yourself…

The Three Ways to Pad Your Pockets at the Pump

Long calls are options with expirations three months out or more. The great thing about long calls is that they give you time – which is important when it comes to trading options. You’ll want to choose a strike price you believe XLE will exceed. That way the value of your option will increase faster since it’s in- the-money.

A bull call spread is an even cheaper way to play XLE while using options.  A bull call spread is a strategy that involves purchasing call options at a specific strike price while also selling the same number of calls of the same asset and expiration date but at a higher strike. This allows you to get into a trade with a much lower risk.

But regardless of what you choose, I wouldn’t buy any options that expire before mid-July. This gives the position time to mature, so you can reap the full benefits of this lucrative pattern.

XLE is currently trading at its 52-week high so you could consider strikes that match it, say the $75 or $80 strikes expiring in September.

And you don’t have to hold your position all the way to expiration. You can close them at any time. If you get a nice gain you are happy with — take your money and run.

3. Pull your profits straight from the source

Global energy expert, Dr. Kent Moors, has been following this story for months – and in an eye-opening video, he reveals exactly why the Saudis’ ambitious ploy is to push oil to $100 before this huge event. Sources are saying this could yield an unbelievable $2 trillion windfall.

You can hear all about that intel right here…

Including how you could make a combined 1,329% on 4 back-door plays before this event even happens.

Of course, you’ll want to talk to your financial professional about what’s most suitable for you.

And the next time you find yourself sighing at the pump – rest assured you’ve got three tricks up your sleeve to make that money back.