Home Trades Is This Trade Really Going To Earn 24,900% Returns?

After over a year of basically no volatility in the stock market, we had something of a volatility revelation which began on February 5th. The selloff that day and the subsequent implosion of certain volatility products (like XIV) created a major jump in market volatility.

As you can see from the chart, iPath S&P 500 VIX Short-Term Futures ETN (NYSE: VXX) shot up above $50 on the day of the big selloff. Afterwards, it remained essentially above $40 until just this past week or so. As you can see at the start of the chart, VXX was far lower before the volatility event in early February. 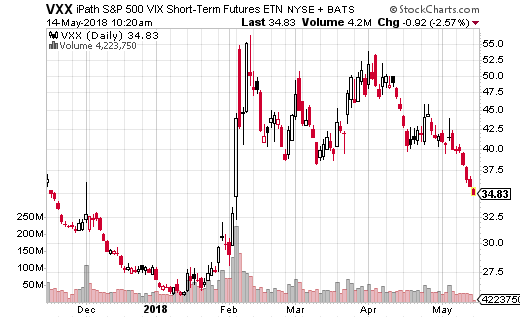 As a reminder, VXX is a very popular ETN and is used to trade short-term volatility based on the VIX indicator – the most common measure of market volatility. VXX is one of the few exchange traded products to maintain a brisk business (i.e. volume) after the volatility blowout.

While many traders like to use VXX to speculate on volatility movement, it is also used to hedge against higher volatility. As an easy-to-access method for getting long short-term VIX futures (that’s what VXX does behind the scenes), it’s one of the simplest ways to protect long stock portfolios.

But what about tail-risk? That’s when something extreme happens, like a major market selloff. February 5th is an example of a “tail-risk day”. Can VXX protect your portfolio in that case?

At least one trader thinks so. This trader is using VXX as tail-risk hedge for the next month. Perhaps he or she thinks the Iran/Israel situation will escalate. Or, it could just be a cheap way to protect against a worst-case scenario.

The trade I’m talking about is an extra-wide VXX call spread. The trader purchased 10,000 June 15th 70 calls while at the same time selling an equal amount of 100 calls. The total cost of the call spread was only $0.12. The spread was so cheap because VXX was only trading for around $36 at the time of the trade (meaning it would need to double just to be in-the-money).

Of course, chances are this trade will expire worthless. And, while the trader spent $120,000 on 10,000 spreads, it’s not a lot to spend from an institutional standpoint. In other words, if this is a tail-risk hedge for a fund or major portfolio, it’s a relatively small price to pay.

As you would also expect, the trade pays off huge if the market does collapse and VXX goes to $100 or above. In that case, the trader would generate 24,900% returns! Granted, even the February 5th correction only pushed VXX from under $30 to about $55. A move above $70 is not likely to happen at any point, much less in the next month.

Regardless, if you’re looking for an ultra-cheap way to protect against a black swan event, this trade is a decent way of doing so. After all, tail-risk hedges are much more about peace of mind than they are about making profits.