To many, it may have come as a surprise when Alphabet’s (NASDAQ:GOOGL) stocks lost ground after its most recent earnings call last month.

The surprising part is that Alphabet, parent company of Google, actually increased its revenue by 17%, and when you look at the earnings miss of 46 cents ($7.50 posted against analyst expectations of $7.96) and revenue miss of $120 million ($20.26 billion posted for the quarter against estimates of $20.38 billion), the loss in market cap seems disproportionate.

As an investor, you might consider it strange that a small revenue miss on estimates can negatively impact stock price to such an extent, especially when the company actually grew quarterly revenues at nearly 20%; however, from an analysis point of view, it’s worth investigating why that happened. 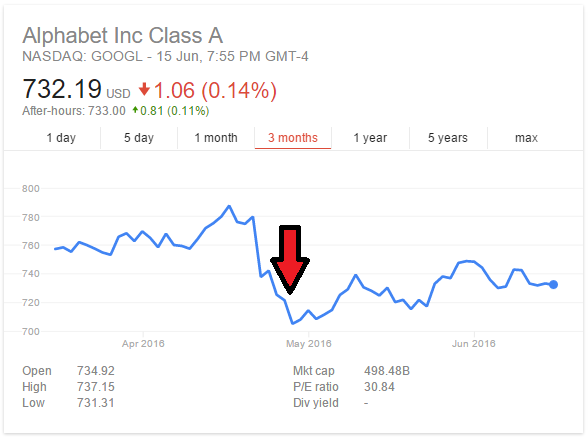 The first thing to do is to investigate their numbers and see if the price drop was indeed warranted or if it’s just a case of higher-than-normal market expectations from the search giant.

At first glance, Alphabet seems to have delivered a solid quarter but look a little deeper and you’ll find a mix of good and bad –very much like what Microsoft (NASDAQ:MSFT) went through this past quarter.

One of the key metrics Alphabet tracks is its traffic acquisition cost, or TAC. This comprises the monies paid to other user networks to serve their ad content to them. Remember, Alphabet’s primary revenue stream is search advertising so this is a critical metric to keep your eyes on. 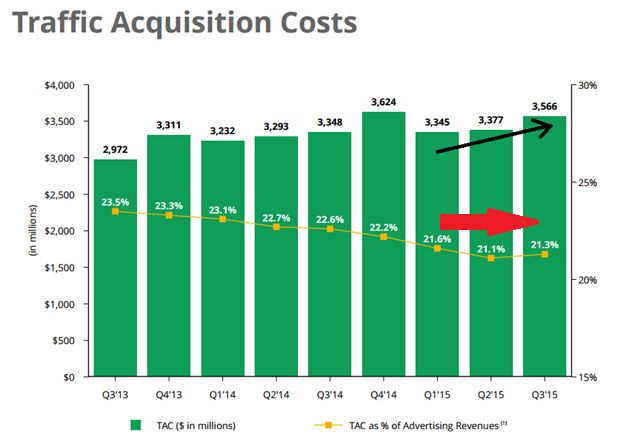 As you can see, over the past few quarters, acquisition costs have been on a steady uptick. Equally obvious, however, is that despite the gradual increase, expenditure as a percentage of revenue has been fairly steady. That means the gains it’s making on revenues currently offsets the higher amounts it’s paying to display the ads.

This is how CFO Ruth Porat explained it during the earnings call for the first quarter:

“The increase in both Sites TAC and Network TAC as a percentage of revenue reflects the fact that our strongest growth areas, namely mobile and programmatic, carry higher TAC.”

So, clearly, the shift to mobile advertising is one of the reasons it’s spending more to have its ads served, and this isn’t something that’s going to change. In fact, as mobile usage grows stronger each year it will continue to impact Alphabet’s margins in greater measure. 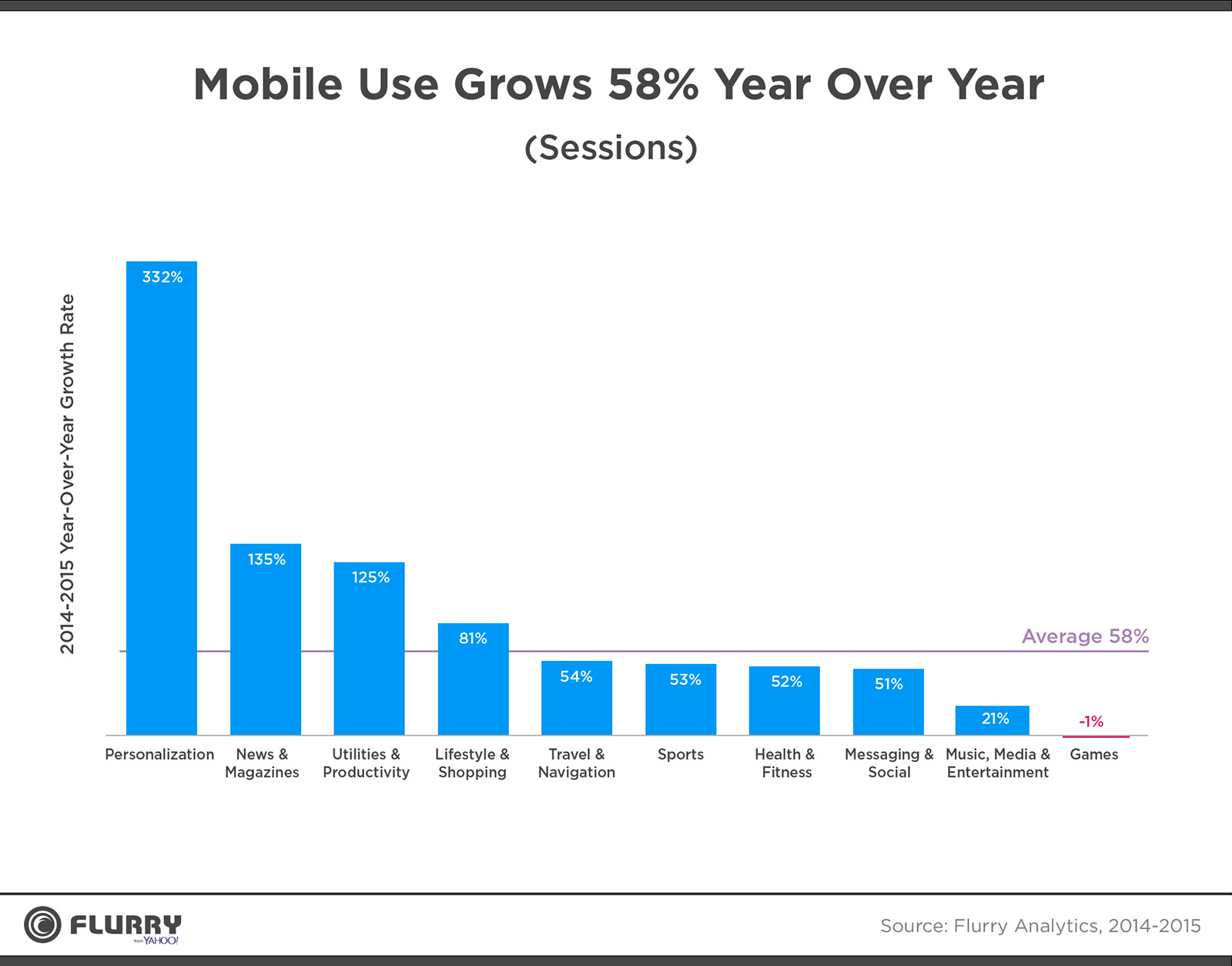 As you can see, mobile data consumption is growing at an average of 58% each year. It’s logical, therefore, to assume that Alphabet’s TAC will continue to increase as it explores even more mobile advertising opportunities to penetrate.

Looking at it from another perspective, the revenues themselves justify the higher expenditure. If Alphabet can maintain this 20% level despite higher TACs, it will continue to keep its operating margins at comparable levels moving forward.

Another metric we need to look at is how much money it’s making per transaction. 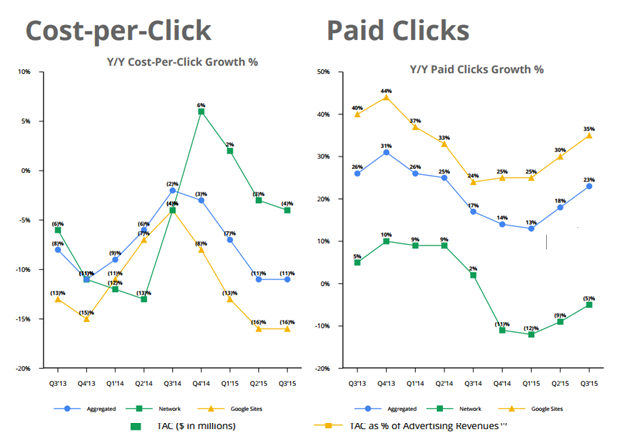 The cost-per-click (CPC) graph you see above represents the income growth from individual clicks on advertisements in Alphabet and partner networks. That component has clearly been on the decline, but as with TAC versus total ad revenues, it is being compensated for by growth in the absolute number of clicks.

Represented in percentages, what you’re seeing is a CPC decline of 9% against a paid clicks increase of 29% (for the most recent quarter), and the relationship between CPC and paid clicks will continue to maintain this trend for the foreseeable future.

How does this relate to the shift to mobile?

Alphabet is essentially paying more to advertise on mobile networks, but its earnings per click have plateaued out. The only way to keep revenues at current levels, therefore, is to keep selling more ads – which it’s been doing successfully for the past few quarters.

That brings us to the question: Will it soon hit a saturation point on ad revenue growth? Obviously, if higher revenues mean more expenditure, there will be a time when revenues hit a wall and expenditure continues to grow. How is Alphabet going to deal with this?

Below is a graph that will help clarify this point. 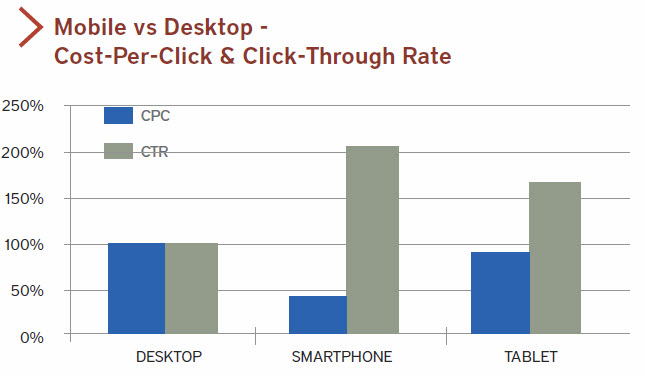 As you can see, the revenue per click from smartphones is less than half of desktop revenues. The reason is that mobile ads have a higher click-through rate (CTR) in comparison with ads served to desktops. The most logical explanation is that mobile screens are small enough for ads to take up significant space, thereby grabbing the attention of the user more effectively than on a desktop, where ads are usually relegated to the sidebars or restricted to very small areas in relation to screen size.

This is further validated by the fact that on tablets, the figures for CPC and CTR are midway between desktops and smartphones. So, screen size is a major driver of engagement – smaller the screen, higher the engagement with ads.

It naturally follows that as mobile usage keeps increasing, ads are going to get cheaper but more effective. This is great for a company that’s advertising but not as much for the network itself. The company that runs the ad network – in this case, Alphabet – must essentially sell even more ads to keep revenues growing.

But screen size is just one part of the equation. The other significant factor is search trends. Because users are shifting toward mobile search over desktop search (as the chart below shows), advertisers now prefer mobile ads rather than desktop ads. Google, therefore, doesn’t have a choice but to undertake that shift to mobile advertising. It’s either that or lose market share to companies like Facebook (NASDAQ:FB), which already has a very strong mobile ad network. 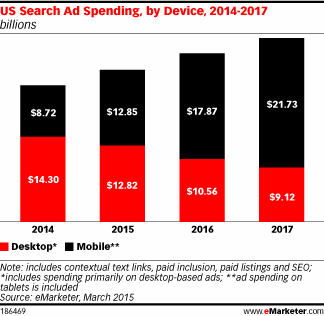 And it’s not just me saying this. Last year, Alphabet recognized that this shift is happening at a rapid clip so it’s fair to say that it’s expecting this to continue into the foreseeable future.

The need for new revenue streams

So now we have a situation that’s much clearer: ad revenues are going up despite higher costs, and that’s a good situation to be in, for now. However, the more Alphabet starts to depend on mobile ad revenues, the more aggressive the competition will be. In the web search space they’ve always been the dominant force; mobile is a different ball game altogether.

The other long-term major concern is the shift to mobile video. Video is fast becoming one of the most consumed forms of media on the Internet, and video advertising is an area where Facebook is moving fast. Admittedly, Alphabet has the YouTube advantage for now, but for how long? Facebook is already offering a host of video services like Facebook Live, and with that it’s in direct competition with YouTube’s user-generated content in the mobile space.

As such, Alphabet needs to look at new channels of revenue if it wants to move smoothly into the next decade. It’s already started moving on several fronts, but there’s still a long way to go because it’s been extremely slow in taking advantage of what it has in hand.

The first of these is YouTube Red, and it’s already very late to the premium video streaming game. In 2007, when Netflix (NASDAQ:NFLX) moved into the online streaming space, Alphabet should have immediately muscled in on the action with its massive YouTube user base. It didn’t, and now not only Netflix, but even Amazon (NASDAQ:AMZN) Prime Video, for example, is far ahead of them. Nevertheless, YouTube Red can still be a promising revenue channel once they get enough premium content in there to make it worth switching from other services.

Another area they’ve fallen down on – but can recover from over the next few years – is the cloud industry. Alphabet has been serving its software on the cloud for nearly a decade but failed to exploit its monetization capabilities. Only with the entry of Senior VP Diane Greene into its cloud business has it taken off in any significant way. However, in terms of cloud revenues, it’s still far behind the likes of Amazon’s AWS, Microsoft’s Azure and IBM’s (NYSE:IBM) SoftLayer.

The one thing Alphabet is good at is putting together the money to drive new initiatives in a strong way. What it lacks is the consistency of effort, and this is why it failed in so many projects that were originally intended to “change the world.”

The way I see it, Alphabet is still a lumbering giant that hasn’t found its strategic direction. This disorientation has caused it to become complacent on ad revenues. Before those revenues start to decline, it need to figure out several things:

As of now, its search revenue continues to bear the load of overall profitability, but we’ve seen that a very small earnings miss at this point can wipe out tens of billions of dollars in market cap. To exacerbate the problem, the 18 times forward P/E ratio means high expectations from the market itself.

If you’re keen on investing in Alphabet, then follow a strategy where you only add to your position on dips. That will keep your cost basis low and ensure that overall gains are maximized on a total returns basis.

Thanks for reading! To view my profile and follow me, please visit my profile page.

About the Author: Guru Focus