Home Trades Gold: The Bargain of a Lifetime

You knew this was coming.

You knew it couldn’t last forever.

That bull market in gold you’ve come to know and love?

At least, that’s what the fools in the mainstream press would have you believe:

That big run-up to unthinkable sub-2k highs in a short period of time, followed by panic selling, has led to the fairy-tale conclusion that the bull market for the yellow metal is over. 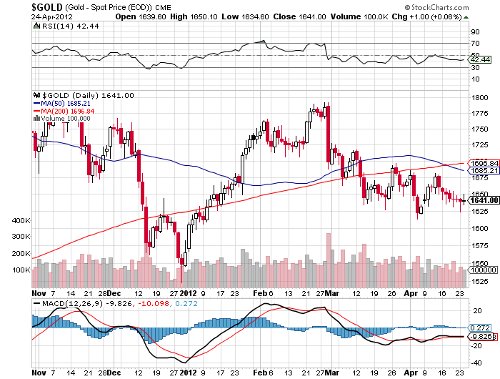 Fundamentally, nothing has changed.

The main catalysts for gold going up are still there.

And even higher prices are on the way for patient investors.

Gold is climbing on news that the Fed could use further quantitative easing to stimulate the economy — and on reports that economic conditions could warrant exceptionally low levels for the federal funds rate for the next two years, at least…

That means gold will run higher on a loose monetary policy and excessively low interest rates.

And the Eurozone crisis is far from over, strongly suggesting higher gold prices are on the way.

I see no reason to even think the gold bull market is over — not by a long shot.

And if I’m wrong about this, I’ll eat crow.

Because on June 28th, the National Defense Authorization Act of 2012 (NDAA), signed by President Obama in 2011, will take effect…

It’ll try to make it nearly impossible for Iran to sell oil to the world markets.

It will sanction any company or country that attempts to deal with Iran’s central bank or buy Iranian oil.

And it will force other countries to choose between buying Iranian oil and being cut off from dealings with the U.S. economy.

However, as the Huffington Post points out, the act could backfire on us…

For instance, Saudi Arabia has increased the amount of petroleum it pumps, and is promising a further rise in output this summer in an attempt to flood the market and allow countries to replace Iranian purchases with Saudi ones.

But experts doubt the Saudi ability to do this long term and — most important of all — global demand is not steady. It’s crucially on the rise in both China and India.

For Washington’s energy blockade to work, Saudi Arabia and other suppliers would have to reliably replace Iran’s oil production and cover increased demand, as well as expected smaller shortfalls caused by crises in places like Syria and South Sudan and by declining production in older fields elsewhere.

Of course, other nations are concerned about the repercussions of the National Defense Authorization Act.

Because once that oil is taken off the market, oil will surge.

Japan, which has been supportive of moves against Iran, is uneasy…

“The higher oil prices, the more affluent Iran becomes,” says Japan’s Finance Minister, referring to the likelihood of some countries ignoring the sanctions and continuing to buy from Iran.

And the act’s sanctions put China in a bind because they must now choose between avoiding doing business with Iran and being cut off from dealings with the United States — neither of which the Middle Kingdom can afford.

China will follow India’s lead, though, bartering goods, services and gold for Iranian oil, sideswiping any foreseen problems with the United States.

This could send the price of gold screaming higher as China’s need to replenish its gold outflow increase in the process.

Why Gold Critics are Wrong

How can the bull market be over when the only solution to our debt problem is buying more debt, which only further devalues fiat currencies and makes problems worse?

Don’t listen to the mainstream press. Gold still has room to run…

So buy the dips. Buy all the gold you can.

Stay Ahead of the Herd,

About the Author: Wealth Daily